This article was originally written for Club and Resort Chef magazine, and edited by Joanna  DeChellis.

Twenty years ago, culinary competition was the touchstone that helped to launch my career.

My first culinary competition was in 1999.  I impulsively decided to enter a hot food “K” Category competition in Washington, D.C.  I had no idea what I was getting myself into. I just knew that I enjoyed cooking. I was from a rural town in southern Virginia. I wanted to be among like-minded people and I wanted to prove how good I was.

Unsurprisingly, I wasn’t nearly as good as I had thought. However, one of the most important moments of my career would happen as a result of that first show. I walked to the loading dock to smoke a cigarette after cleaning my kitchen and just as I took out my lighter, an imposing voice behind me asked if he could get a light. I turned and looked up to see one of the judges, Harmut Handke. At that moment, I didn’t know that he was the Executive Chef at the Greenbrier Resort. I didn’t know of his vast career accomplishments. I did recognize that he was someone that should be respected, if only based on how everyone else deferred to him that day.

Chef Handke gave me a quick assessment and asked me where I was from. “Blacksburg, Virginia,” was my reply. He said that I needed to get out now, before I was old enough to have responsibilities and to find a mentor and learn as much as possible from that person.

I took his words to heart and the advice from Chef Handke changed the course of my life. I would go on to work for two Culinary Olympic chefs, a CMC, and stage for another CMC who would become my long-time mentor.  I competed frequently, earned medals, became an ACF and WACS competition judge, and competed internationally on several occasions.

Fifteen years after my first competition, my competition career came full circle in Kansas City when two of our young chefs earned positions on Youth Team USA and our property was awarded the ACF Achievement of Excellence award. The most satisfying moment of that convention was when I happened to see Chef Handke sitting alone near the Youth Team USA tryout kitchens. I approached the chef and let him know that although he wouldn’t remember me, his advice had a massive impact on my career, and subsequently, the careers of our young cooks. If he hadn’t volunteered his time as a competition judge, or if I had decided that competition was too ambitious for me that first time around, then I wouldn’t have been standing there with him at the convention.

In the beginning, competition was all about the shiny medals and the thrill of achievement. While I still love the feeling of a gold medal as much as anyone, I know that the true reward has been in the relationships that have been forged and the lessons that I have learned along the way. I’ve come to relish the bronze and silvers as much as the golds because I know that I would not have had the same attention to detail, respect for mise en place, or self-awareness if not for the competitions that I made myself enter.

When I look back over the past twenty years, I realize that most of the impactful moments of my career happened as a result of competing. There was never a convenient time to practice or compete. It was always hard work. I lost lots of sleep and there were plenty of times that I was frustrated with the results. I wouldn’t trade it for anything. 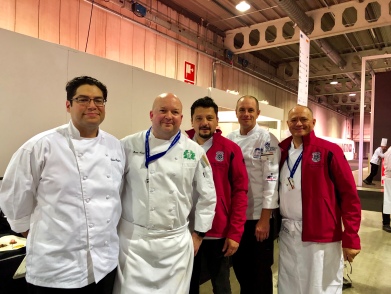