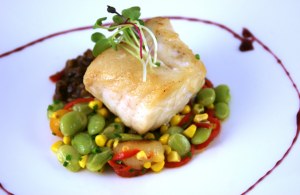 After cooking for awhile, it’s rare to run across an ingredient that I’ve never heard of or experienced. The Atlantic Wreckfish was such an ingredient this summer. After working with it for the first time this season, it has quickly become one of my favorite fish.

Wreckfish can reach seven feet long and up to two hundred pounds living at the bottom of the Atlantic Ocean. They hang out in caves and shipwrecks, hence the name. The only place where it is legal to farm Wreckfish is a spot off Charleston called “The Bump”, a massive drop-off in the ocean floor that kicks the Gulf Stream out into the Atlantic.

The wreckfish diet consists primarily on shellfish and bottom-feeding fish. It’s said that they eat so much shellfish, the closest a person with a shellfish allergy will come to enjoying lobster is to have Wreckfish.

Some reasons this fish has been relatively obscure: The fact that it is exclusively caught in the Southeast, it’s price hovers around sixteen dollars a pound (making it more expensive than Prime Certified Angus Beef) and the fishing and selling of the product is extremely regulated. 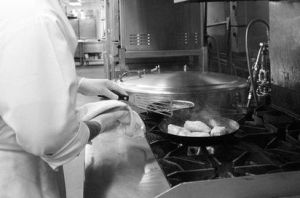 For this dish I’ve got a “surf and turf” theme going. The flavor and texture of the Wreckfish is delicate; after searing it, it is finished in the oven then brushed with whole butter, it gets a squirt of fresh lemon juice, then a sprinkle of coarse sea salt. It is stacked up against the deep, rich flavor of a smoked buffalo and barley ragout, which also serves double-duty as the sauce. The vegetables are fresh and stellar…fresh corn, sungold tomatoes, roasted cippolini onion, piquillo pepper, and edamame beans with sliced chive.

The dish is garnished with red wine reduction and local microgreens from Lucky Leaf Garden. For more on Lucky Leaf, check this out.