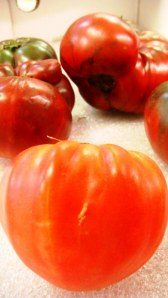 Thomas Keller once said “If you and I were preparing the same dish and everything were identical: We had the same kitchen, the same crew, the same recipe, but my ingredients were better quality, then I would beat you every time”. After having a twenty-five course tasting at Chef Keller’s restaurant, Per Se, I would pretty much believe anything he says.

What bowled me over about that dinner wasn’t the complexity of the dishes, but rather the simplicity of them. The flavor combinations were outstanding and sometimes unexpected, but the ingredients were always top flight. Peaches that were flown in from California. Mushrooms from a farmer in upstate New York. While I’ve always known logically that great ingredients make great food, this dinner beautifully illustrated the point twenty five times over five and a half hours.

This dish is an example of great ingredients simply prepared to make a really enjoyable dish. On the plate I have heirloom tomatoes from Fisher Farms, micro swiss chard from Lucky Leaf Garden, a very nice Extra Virgin olive oil, balsamic reduction and seasoned with toasted and freshly ground black pepper and coarse sea salt. Adding a little fun to the dish is a Parmesan-Reggiano crisp and Parmesan-Reggiano sorbet. The crisp and the sorbet adds texture and the novelty of differing temperatures to keep the dish interesting from start to finish.

This was the first time I’ve made this sorbet and I was really surprised by how well it came out. It was almost entirely freshly grated cheese, with a little toasted bread, heavy whipping cream and liquid glucose. I used liquid glucose rather than simple syrup because it has a lower freezing point, making it ideal for ice creams and sorbets.

After adding all the ingredients together and letting them freeze overnight, I ran the sorbet through the PacoJet twice, resulting in the silkiest sorbet I’ve ever seen; it was completely smooth with no perceivable crystallization.

In the end, it was a clean, light and fresh dish that, while there was some novelty, kept the focus firmly on fresh ingredients at the height of their season. 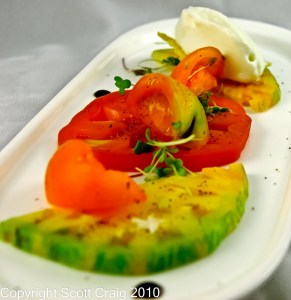