The theme of this party was “Out of This World”. What was initially an intimidating theme (space food?) turned out to be pretty awesome.

The main buffet was “Th 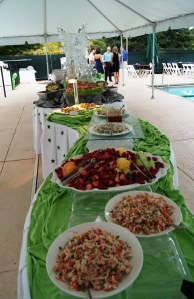 The Babelfish from “Hitch Hikers Guide to The Galaxy” was paid proper homage in the form of an ice carving by the very talented Lydia Ross. It is pictured in the center of the buffet, along with the seafood items.

Outside of the main buffet, there were various “Space Stations” featuring different themes. The first was the “Tang Tasting” station, featuring a trio of selections which highlighted the Apollo mission’s gift to gastronomy. 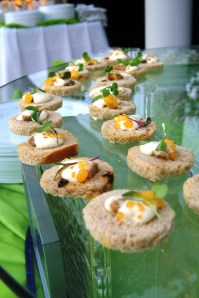 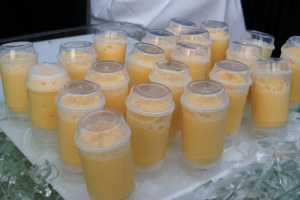 Tang “Push Ups”: Tang-flavored frozen yogurt, made on the station using a Paco Jet. The flavor was reminiscent of a Dreamsicle.

Duck, Foie Gras, Dried Fruit and Chestnut Roulade, wrapped in bacon and cooked sous vide on the station. The roulades were crisped in a saute pan before slicing. They were served with a Truffled-Port Demi.

The next station, my favorite, was the work of Mathew Tilman. It was called the “Mars Bar”, and featured a selection of gastro-cocktails.

Other stations that evening included a Southwest inspired “Area 51”, and an outstanding pastry display by Chef Bill Hallion and his team.

In the midst of long weeks and high stress, it’s easy to sometimes forget why a person would enter this field. A night like this, though, where you get to stretch out creatively and have fun with the food brings you back to those first days of cooking. Having no walls in between yourself and the people enjoying the food is another added bonus.