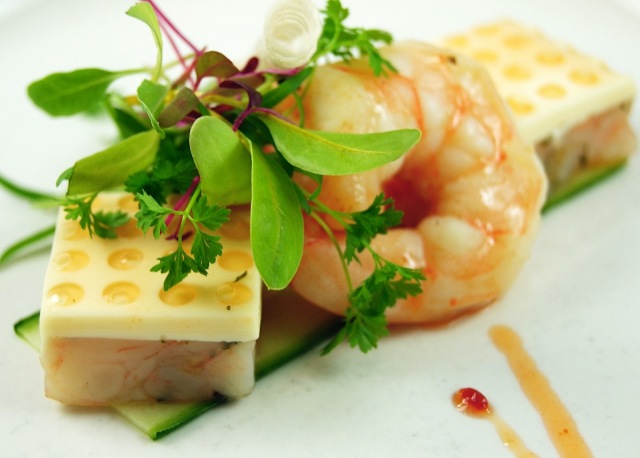 This dish was a duo of shrimp, with one preparation traditionally poached and the other preparation of shrimp compressed and prepared sous vide.

For the poached shrimp I used 21/25 tail off black tiger shrimp, with a poaching liquid of water, lemon juice, white wine and Old Bay seasoning.  Bring the water just barely to a simmer, when wisps of steam begin rising from the top.  If the water is too warm then the shrimp can easily overcook, becoming tough and unpalatable.

For the second preparation of shrimp I chopped the shrimp finely before tossing it with a slurry of Activa RM.  I added minced shallot, kosher salt, freshly ground white pepper and finely minced lemon zest.  The mixture was then placed in cryovac to compress the shrimp and remove any excess air.  After packaging in cryovac I used a heavy rolling pin to achieve a consistent thickness, then allowed the packaged shrimp to sit in refrigeration for five hours to allow the Activa to bind the proteins.

After the packaged shrimp came out of refrigeration it was cooked sous vide at 130 degrees for thirty minutes, then immersed in an ice bath to stop the cooking process.